When I scheduled this post, many months if not a year ago, Myanmar was not at all in the news the way it has been in recent times following the election. I aim to keep this blog apolitical, and I will not be going in-depth. Those expecting a treatise on the current political situation and future for Myanmar are going to be disappointing.

The Myanmar I first set foot in many years ago is very different from the Myanmar of today. It is not exactly a tax haven, nor is it a place most people would be comfortable opening bank accounts and storing large sums of money. Although it has many of the necessary attributes for precisely that.

Often touted as the next Asian economic giant, investors and advisers alike talk promisingly about Myanmar. 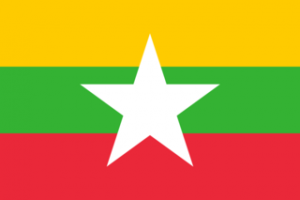 Myanmar is a country which shares border with Bangladesh, India, China, Laos, and Thailand. Until 1948, it was a British territory under the name British Burma.

Before becoming British, Myanmar was a regional powerhouse under various monarchies, tracing its history back to ancient times. The first humans arrived in Myanmar around 11,000 BC. Modern-type civilizations were formed around 1500 BC, with statehood popping up about 1,000 years later.

I know it’s a bit of a cop out, but while the history of Myanmar is very interesting, it isn’t actually very relevant for this particular context.

Since independence from the British, the nation has undergone wars and a military dictatorship that lasted almost 50 years, during which the country was very closed off from the outside world. In 1991, democratic elections were allowed although these were generally not considered fair and open elections.

Human rights have been routinely disregarded in Myanmar. The government has killed hundreds of thousands in skirmishes and when clamping down insurgencies, the most notable perhaps being the Rohingya.

In 2008, the military junta enacted a new constitution which would lead Myanmar on the path towards democracy or at least a variant of democracy that they saw fit.

The results of elections held in 2010 tipped the ice berg after rigging accusations and a fed-up and empowered population rose up, toppling the military junta by 2011. The results of the election were generally seen as favourable internationally, with diplomatic relations warming up after years or decades of silence or caution.

The first free elections in Myanmar were held in November 2015 and a new parliament convened in February 2016. Foreign relations have improved dramatically and foreign investment has started to pour in like never before.

Population is somewhere north of 51 million, most of which live in rural areas.

The economy is almost entirely dependent on petroleum gases and agriculture. The country has been subject to numerous sanctions, which has crippled its economic growth.

It is one of the poorest nations in Asia, suffering from decades of neglect and corruption. Infrastructure is largely bad if not almost entirely lacking. When I say that most of the 51 million inhabitants live in rural areas, I don’t mean quaint little villages just off the highway. These are villages where you would almost believe time has stood still.

Attempts at stimulating the economy through tourism were for long unsuccessful. However, this is one area that is improving. With much of the population being able to converse almost fluently in English, it is in many ways a more welcoming country than some of its regional neighbours. Since 2012, the visa requirements have been easing up for both tourists and business travellers.

The largest cities are Yangon (also known as Rangoon) with 5.2 million inhabitants, Mandalay with 1.2 million, and the cpital city of Naypyidaw with 1.1 million.

The currency is called Burmese kyat. It is one of the least valuable currencies in the world.

While the top-level domain .bu was created, it was never put into use. Instead, .mm is used. 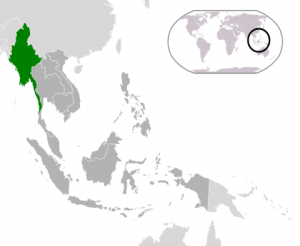 Banks popped up shortly after independence and a central bank was enacted in 1952. With the military junta, all banks were nationalised and the government actively broke down the young banking sector.

The military junta made most of the old bank notes invalid, causing a deeply rooted lack of trust in government and in banking among the population.

The infamous Asia Wealth Bank (AWB) was formed in 1994 and was the first bank to issue credit cards. The bank initially received a warm welcome internationally but after it became clear the bank had no idea how or just no intention to follow international standards of compliance (such as they were back then), the bank was eventually shut down after it was declared a primary money laundering concern.

This all came about during the 2003 banking crisis in Myanmar, which was triggered by distrust and several smaller banks and unauthorized banks or semi-banks folding after their Ponzi-scheme-like, unsustainable lending strategies started to crumble.

This also caused a bank run at AWB.

Today, Myanmar is one of the least banked countries in the world, with some 95% of the population not using banks.

Tight government regulations are in place to control the flow of capital and issuance credit and interest rates, which on the one hand may be further holding back growth of financial services in Myanmar while on the other helps keep the fragile economy in check.

Today, the Myanmar banking sector is working hard to make amend for previous lapses in judgment and compliance. Eager to get into the enormous potential of Myanmar, banks are eager to let go off the past and give the banks a new chance.

While right in this moment banking in Myanmar is fairly lackluster, it will likely be one of the best of any developing country in a few years. Trying to get an unbanked population to bank has historically proven best by making banking simple, which includes taking a reasonable approach to compliance while embracing modern technology.

Opening a bank account is doable for non-residents. Remote account opening isn’t the norm but it does happen.

Personal and corporate accounts are accepted. Keeping a few thousand EUR/USD equivalent in the local currency will satisfy most banks, as long as your profile is overall not too suspicious.

Interest rates of up to 10% (or even higher) for savings in the local currency can be opened with relative ease in person.

While foreign currency (including various Asian currencies) accounts can be opened with relative ease, transfer times can currently be very long. It is likely that every intermediary on the way performs a manual review of transactions to and from Myanmar, due to the jurisdiction’s spotty past.

Some banks are connected directly to money remittance companies such as Western Union and MoneyGram.

Effectively very strict and probably completely impenetrable right now. This is not by choice but rather by omission and a side-effect of prolonged isolation.

While a degree of secrecy is likely to remain intact to foster trust in banking amongst the population, it is unclear how long Myanmar can afford to stay away from CRS/AEOI and – especially – FATCA. Not a single exchange of information treaty is in place.

This isn’t an investment blog or even an investment article. Suffice it to say, though, that I the number of clients looking to enter Myanmar has never been higher and more companies are being formed in Myanmar than in the last 50 years combined.

This isn’t a jurisdiction like Hong Kong where you form a non-resident company and call it a day. Companies formed in Myanmar engage in business in Myanmar.

And they are subject to some pretty tough rules on what is and what is not allowed to import and export. Coupled with restrictions on currency exchanges, this can be  tough jurisdiction to break into even for the most seasoned business owner.

The MFIL (Myanmar Foreign Investment Law) sets out a number of advantageous and familiar regulations foreign investors can avail themselves of to set up shop in Myanmar. These include five-year tax exemption (can be extended indefinitely by approval) and other tax incentives. It is quite easy to obtain zero or very low effective corporate tax in Myanmar. The normal rate is 25%.

Incorporation fee is 1 million MMK (circa 750 EUR or 850 USD). Minimum two members are required. The minimum share capital required is 50,000 for a service company and 150,000 USD for a manufacturing company.

Record keeping requirements are strict but not onerous.

Costs of labour are low but rising.

With improved infrastructure, Myanmar is likely to continue becoming even more competitive to Indonesia and Vietnam for manufacturing jobs.

As many back packers and an increasing number of business travelers can attest to, Myanmar can be extremely charming and inviting.

Obtaining permanent residence is no easy task at the moment. Efforts are being made to ease up on this, but the republic relatively young, if you remove the 50 or so years during which it did not see many foreigners.

While I enjoy every visit to Myanmar, it is not yet a country I would see many foreigners settle down in for any long period of time.

It is however a jurisdiction with tremendous potential for the near future, in almost every regard.

2 Comments on "What’s up in Myanmar?"