Remember all those months ago when we looked at Turks and Caicos Islands? What a journey it’s been since then. Incidentally, this is the 100th post my little blog.

And this is the end of that journey. We are back on mainland: the United Kingdom.

Now, the UK both is and at the same time is not a tax haven.

How can a country that taxes non-resident companies on world-wide income be a tax haven? Let’s find out. 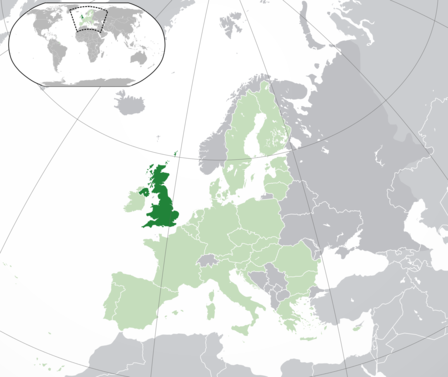 UK and EU. Map from Wikipedia.

The UK is Europe’s second largest economy after Germany. The country is known for being business-friendly, ranking 8th in the world according to the latest World Bank’s Ease of Doing Business rankings.

With low costs, ample tax treaties, English common law, excellent e-government facilities, and one of the best reputations a jurisdiction can have, it’s easy to understand why the UK is so popular for start-ups, established businesses, and financial service providers of all sizes.

UK in this section only refers to England and Wales. I will cover Scotland later. Northern Ireland will not be discussed.

Why not Great Britain? Let’s not go there. This is already convoluted enough.

Only the US with its LLCs can compete with the UK when it comes to ease of incorporation for a non-resident. It is fast, it is easy, and it is cheap.

The cheapest providers out there can form a UK company for you for little more than 20 GBP. For a non-resident, you are looking at typically no less than 100 GBP for company and registered office.

Of course, you can’t expect a lot of help at that price point. If you need professional advicement, expect to pay closer to 1,000 GBP.

Timeframe for forming a UK company can be as little as a few hours but often a couple of days for non-residents.

Stellar. It is an onshore jurisdiction, not seen as a tax haven.

Some criticism has been raised against UK authorities for taking a long time to respond to foreign requests, with the OECD stating that “on average takes 12 months to complete before information is provided to the requesting jurisdiction.”

This means that the UK is able to and does engage in exchange information but it can take extremely long.

However, its overseas territories and other dependencies at times tarnish the UK’s overall reputation. The UK has been criticised for being heavy-handed against tax havens, while touting no less than ten tax havens of its own; eleven including the UK itself.

This is the most popular type of company. The laws governing UK private limited companies go back to the incorporation laws in the 1600s that laid the foundation for the modern corporate entity.

As of October 2015, corporate directors are no longer permitted unless a special exception is granted. However, even then,

20% as of April 2015. This eliminates the previously existing small companies rate, also of 20%, which was in place as an incentive for smaller businesses while the corporate tax rate for larger companies has dropped from 30% in 2008.

This is where tax treaties become attractive. Because a UK company is considered resident in the UK simply be being incorporated there, tax treaties should permit for tax credit on taxes paid in the UK. This isn’t always entirely that straight-forward. If you don’t seek professional advice about your current situation, you are not being responsible about your company and personal finance and – absolute worst case – liberty.

And as always, there are numerous ways to reduce the effective tax burden by making deductions and setting up different ownership structures. But unless you are a very large corporation, forming a private limited company in the UK means paying 20% tax on profits net of deductions. The UK has strong anti-avoidance laws and is hard on tax dodgers.

This is the premier tax planning vehicle in the UK. LLPs are largely comparable to LLCs.

Comparable to LLC in that the entity is not liable for corporate tax. Instead, members are taxed on personal income or, if they are corporate entities, profits or revenue as determined in their country of tax residence.

All members, directors, and shareholders of companies are listed on public records, as are annual returns and financial statements.

UK is a very transparent jurisdiction.

Required by law. Annual filings must be made.

There has been an increased interest in Scotland and its LP (Limited Partnership). They are very similar to UK LLPs without any significant advantages.

A Scotish LP, unlike a UK LP (which is different from UK LLP and which I did not cover earlier since it is a rarely used type of company), is a legal person.

Formation costs are generally much higher than UK (England and Wales) companies.

The UK banking sector is among the most well-developed in the world and offers generally great quality at a typically fair price — if you are a resident in the UK.

Non-resident banking in the UK is challenging. While a lot of UK banks take on non-residents, those clients’ accounts usually end up being domiciled in Isle of Man, Jersey, Gibraltar, or – rarely – Guernsey.

Private banking is a fairly big branch within the UK banking sector but, again, non-residents typically end up having their accounts domiciled elsewhere: Switzerland, Liechtenstein, Monaco, Luxembourg, or the aforementioned islands and peninsula.

So what exactly are your options when it comes to banking for a UK company with non-resident shareholders and directors?

There are agencies that claim they can place such UK companies with local banks in the UK. While this is true, it’s not entirely as simple as making an introductiong. Unless your company has a large turnover (in the vicinity of 1 million GBP), it will take some sort of nominee solution to secure a bank account.

UK banks often require more than 50% of the directors or members to be UK resident natural persons, meaning that 1 out of 2 (50%) isn’t enough. At minimum, it would have to be 2 out of 3 directors.

What other options are there?

Quite simply – bank somewhere else. UK being a reputable jurisdiction is relatively easy to open bank accounts across the world, especially EU and territories with good relations with UK such as Hong Kong and Singapore, and of course British territories.

One of few jurisdictions that lack a banking secrecy law. There are professional confidentiality laws and data protection laws in place to ensure that financial information doesn’t seep out to the public.

In terms of turnover and assets, the UK banking sector is greatly dominated by five banks. This includes Standard Chartered, which although headquartered in the UK has most of its operations and assets abroad.

Other noteworthy banks in the UK include:

A UK license is required to (legally) offer gambling to UK residents. Many EU-based operators are honouring this due to the value of the UK gambling market.

License requirements are among the most stringent in the EU and with the high costs of running a gambling company out of the UK, many opt only for the license while keeping operations (and primary license) in for example Malta.

Taxes are favourable but not as favourable as other jurisdictions, even within the EU.

Standards of living in the UK are among the highest in the world – whether it’s central London or a smaller city or a picturesque village.

Those who qualify as non-domiciled residents (non-dom res) can enjoy a very favourable tax regime.

Otherwise, taxes in the UK are typically average to slightly below average. Watch our for council tax when deciding where to live.

How to Become Non-Domiciled Resident in the UK

The UK Government states that:

UK residents who have their permanent home (‘domicile’) outside the UK may not have to pay UK tax on foreign income.

What does this mean in reality?

Persons who have a domicile outside of the UK, although resident in the UK, can claim non-domiciled resident status and thereby only pay income tax on foreign income. Since 2008, this has been made much more difficult with a minimum tax of 30,000 GBP per year to keep the status long-term.

EU and EEA nationals – at least as of writing – have right to free movement in the UK, although UK is not a member of the Schengen area.

The UK government website is an excellent source of information and it would be superfluous of me to go into greater detail. Simply start at Visas and Immigration to learn more.

It it possible to apply for British citizenship by naturalisation if you are 18 or older, have no criminal history, speak English, live in the UK legally, and intend on continuing to live in the UK. Additionally, you must have lived in the UK for five years prior to applying, during which you cannot have been outside of the UK for more than 450 days and no more than 90 days in the last 12 months.

The UK is a phenomenal jurisdiction for incorporation, offering the easiest means to form a zero tax company for non-residents – the UK LLP.

Banking in the UK is excellent but effectively limited to residents.

The UK has one of the best reputations of all jurisdictions in the world today, thanks to high transparency, strong but fair regulatory bodies, and a business-friendly environment.

But if you want something traditionally offshore, you are better off with one its overseas territories and dependencies: