Today we continue our journey across the various British territories, today a British Crown Depedency, much like Isle of Man.

One of the two jurisdictions often referred to as the Channel Islands, the bailiwick of Guernsey consists of several islands, most notably: Guernsey, Alderney, and Sark. Each have their own parliaments.

Alderney and Sark will be touched on in this article but Guernsey is the main focus.

Guernsey was likely settled as early as 10,000 BC when the surrounding landscape looked very different from today.

Recorded history starts in the early 900s when Guernsey formed a part of Duchy of Normandy but the island pledged allegiance to France in 1204.

English influence grew as the British Empire expanded. When the English civil war broke out, nearly all of Guernsey sided with Parliamentarians, due to its affiliation with Calvinists. The Royalists of Guernsey were the last to capitulate.

The strategic location of Guernsey was important during wars between Great Britain and France and Spain.

Several important forts and castles were raised on Guernsey to keep it safe.

In World War I, some 3,000 Guernsey islanders fought in the British military.

In World War II, German troops occupied the Channel Islands. Many islanders were deported to Germany. A concentration camp was built on Alderney, the only one to be built on British soil.

After the war, Guernsey was returned to the United Kingdom and is today a crown dependency with its own parliament and own laws. it relies on United Kingdom for foreign relations and military.

Guernsey is neither a member nor an associate member of the European Union. 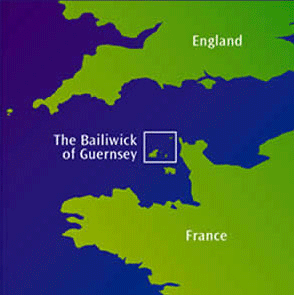 As the lesser known of the Channel Islands, Guernsey as a business location isn’t very well known outside of gambling. It’s a tax haven without any significant negative connotations. OECD has given Guernsey the rating of Largely Compliant.

It is a well known and reputable investment hub.

The Guernsey Financial Services Commission (GFSC) is responsible for businesses that offer a financial service. It is a responsive and attentive regulator. The website is frequently updated. There is almost always someone available to answer the phone and emails rarely take more than a day or two to be responded; not rarely same-day.

The government also runs an initiative called the Guernsey Registry to promote company formation and business in Guernsey.

Incorporation in Guernsey for the purpose of forming a trading business is not very common. Most incorporations in Guernsey are as investment funds, holding companies, or related activities. The costs are high with final tallies often landing at several thousand pounds, despite modest government fees. The benefits over the likes of Gibraltar and even Isle of Man are unclear.

Incorporation is regulated under The Companies (Guernsey) Law of 2008. Similar to BVI, a Corporate Service Provider (CSP) is required in order to form a company even for local companies (of which there aren’t many).

The available company types are: Limited Companies, Limited by Guarantee, Incorporated Cell Companies, and Unlimited and Mixed Liability Companies are permitted. The most popular is the Limited Company.

Companies must have a minimum of one shareholder and one director. Corporate ownership and directors are permitted. Ultimate ownership is however always disclosed to the registered agent and authorities are empowered to compel registered agents to disclose such information.

There are no requirements on local ownership or directors but one director must sign the memorandum, for which a nominee is often used.

A lot of effort has gone into simplifying the incorporation procedure, rarely taking more than a few days. That is, once you pass the rather onerous due diligence requirements most registered agents impose. It can seem unnecessarily daunting a task to form a company in Guernsey although it does (hopefully) protect the jurisdiction from involvement by elements the government considers undesirable (i.e. criminals).

Foundations are new to Guernsey, the law being in 2013. It has been a well received piece of legislation due to the jurisdiction’s clean reputation and an increase in demand for foundations as asset protection and wealth management vehicles.

Financial services are taxed at 10%, utilities providers are taxed at 20%, and companies with income deriving from real estate in Guernsey are subject to 20%.

All other companies are subject to 0% corporate tax.

Directorship and other corporate information and filings are on public records, except for ownership.

For foundations, only information such as foundation number and address appear on public record.

Required but need not be submitted.

Companies with a turnover of less than 6.5 million GBP, net balance sheet less than 3.26 million GBP, and which have fewer than 30 employees may be exempt from audit requirements if shareholders so decide.

One of the mainstays of the Guernsey financial sector, trusts in Guernsey go back to at least the 1600s. Modern laws were formed during the 1960s and 1970s and are today regulated under the The Trusts (Guernsey) Law, 2007.

Trusts can be perpetual and forced heirship is mitigated by Guernsey law superseding any other for inheritance purposes.

Income from a trust may be subject to Guernsey income trust if the trustees are Guernsey residents.

Deposits are shrinking as well. According to the latest report, total deposits have decreased from just under 130 billion GBP in March 2012 to just over 80 billion GBP in December 2014.

The banking sector in Guernsey is in essence all about private banking. There is very little business or personal banking taking place here.

None to speak of. Comparable to Malta in that it has professional confidentiality but no specific banking secrecy. Banking information can be disclosed under lawful requests.

Guernsey has signed up for the EU Savings Directive.

There are 31 banks licensed in Guernsey. Some noteworthy examples include:

Alderney is the third largest of the Channel Islands and is a member of the Bailiwick of Guernsey. Guernsey is responsible for most of Alderney’s non-domestic dealings, many of which are in turn handed over to the United Kingdom.

Alderney is mostly known for being an igaming (online gambling) jurisdiction. Regulated by the Alderney Gambling Control Commission, Many of the most well known operators and service providers are licensed (often one of several licenses across jurisdictions) here: IGT, Ladbrokes, Boyle, and so on.

Having kept its feudal system until 2008, Sark (opinionated article) is quite an oddity. But that’s not the point of discussion here.

Sark has its very own gambling laws, enacted in 2003. It is not a very popular jurisdiction, far behind Alderney.

Life in Guernsey is a life of moderately good weather on a small and isolated island tucked between the UK and France, closer to the latter than the former.

Communications to the outside world are quite poor, with flights limited to UK, Ireland, Jersey, Zürich, Geneva, Jersey, and Alderney. Summertime, a few flights to Germany are Netherlands are added.

Although lacking a number of taxes (VAT, capital gains tax, inheritance tax, wealth tax), there is nonetheless an personal income tax of 20%. This can be capped at 110,000 or 220,000 GBP per year depending on type and source of income.

Guernsey residency is available to Qualified Residents, who must fulfill certain criteria.

Because of its relationship to the UK, anyone with the right of abode in the UK can relocate to Guernsey. EU, EEA, and Swiss citizens have this right.For other nationals, residency in Guernsey can be taken up two other ways. One is by having close connections to Guernsey and show 500,000 GBP in capital or an income of at least 50,000 GBP.  What constitutes close connections is up to the authorities but typically includes having relatives living in Guernsey. The other way to obtain residency is by investment of 1 million GBP of which 750,000 GBP is invested in UK government bonds.

Guernsey is a fine jurisdiction for trusts and foundations. Although contracting, the banking sector is still quite strong with many fine institutions available.

For business, Guernsey has a long way to go to compete with the likes of Jersey, Isle of Man, and Gibraltar.

Be the first to comment on "Jurisdiction Spotlight: Guernsey (and Alderney and Sark)"